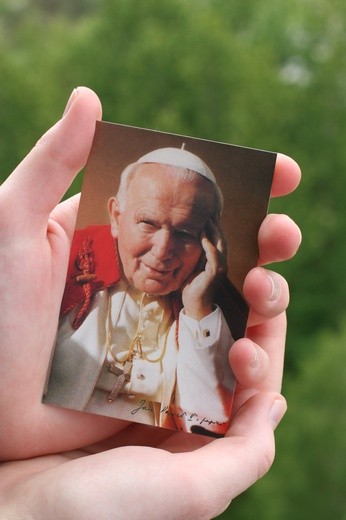 I would like to tell you the story of the birth of my son, as I believe that he lives thanks to the Holy Father John Paul II. The story should begin at the time of the Holy Father’s election.  So, with great emotions, I, my husband, and our 6 years old daughter were participating in the Mass broadcasted on television after the election of the Pope.  And, at some point with tears of emotion, I said to my husband that if we will have a son, to honor the Pope, we will name him Karol.

And, it happened.  Exactly, two months later I found out that I am pregnant.  At that time, I had two dreams in which I was dreaming that I gave birth to my son and I was giving him to Vatican for upbringing.  I woke up crying as on one hand I was crying – how can I give my son to somebody and then, on the other hand – I knew that I am giving him to good hands.  I was six months pregnant, when I participated in the meeting with the Pope at Błonie, in Kraków on June 10, 1979.  I gave birth on the beginning of the eighth month.  – ‘You have a son’ – said the midwife.  She was surprised, when I told her that I already knew.

The child was born in asphyxia – he did not make the first sound.  They were resuscitating him for 13 min. and finally, he cried.  It turned out that my husband and I have the serological conflict in the groups of the blood.  An immediate transfusion was needed – our son received two transfusions, but his condition did not improve.  He did not have suction of digestion responses.  Bilirubin increased to 22 levels.  After ten days, the doctor released me from the hospital and told my husband to return on the next day for the body of our son, as there is no hope.  I was not aware about this.  On that day, a holy Mass was celebrated at 6 p.m. in the intention of our son in the Vincentian Fathers Church in Kraków.

On the next day, my husband went to the hospital expecting the worst information, while the doctor, smiling, stated that this is a miracle and added – since yesterday, from 6 p.m. the condition of our son was improving, bilirubin was going down every hours by 4 levels and our Lolek started to accept food.

I owe to the Holy Father, John Paul II, that I have a son.  I also need to mention that after the birth of our daughter, I had a miscarriage and later on I had problems to become pregnant. All the time at the hospital I was praying to the Holy Father for an intercession to the Mother of God for saving our son, Lolek.