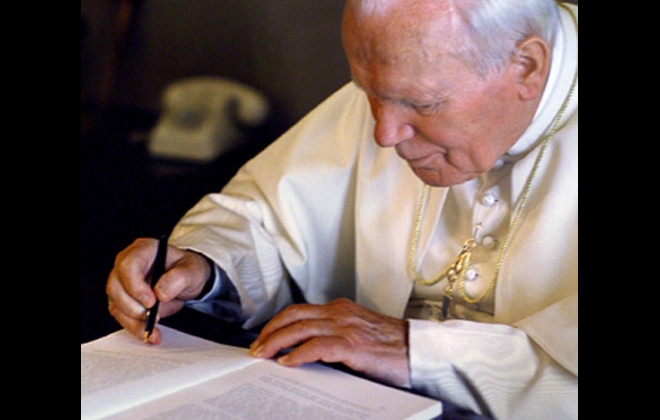 I am asking the Archbishop if John Paul II during Advent prayed more than usual.  The Archbishop thinks for a while.  It is difficult to pray more, if every day he prays almost without a break – he said.  There is not the slightest exaggeration in what once André Frossard wrote about John Paul II:  that the Holy Father prayed the way he breathed.  Prayer designed the rhythm of his day, the rhythm of his life.  This was also the case during Advent with the only difference that before Christmas, the context became clear.  The Holy Father has spoken about it many times like a few days before Christmas in 1997, during Angelus prayer he said: “The Lord is close.  You have to prepare for His coming.  This is the meaning of the entire Advent (…) for faithful to fully experience the mystery of the incarnation.”  The retreats led by Father Ranier Cantalamessa were helping in these preparations not only to the Holy Father, but also to his coworkers, Cardinals, Bishops, General Superiors of various orders.  In 1980, John Paul II chose this charismatic Capuchin with a good smile from three candidates.  Since that time, Father Cantalamessa was leading conferences and meditations every Friday during Advent and Lent.  He once told the journalist of “Niedziela”, Polish weekly, that John Paul II was always present at all retreats.  And, that it was moving, because after all he had so many other responsibilities.  And yet this form of preparation for Christmas or Easter was important to him.  Fr. Cantalamessa recalled that sometimes, after such a conference, he saw the Heads of states waiting to meet the Pope.  And, he simply listens to the word of God from the mouth of the smallest, the last of the priests of the Church – he said.  In fact, it is the Holy Father who proclaims the sermon to all of us, the entire Church, showing great respect and desire for the word of God.  The Archbishop recalls that after each such conference, John Paul II greeted Fr. Cantalamessa and thanked him.  He was sincerely grateful to him – he says.  – At the end of the retreat there was a special private audience, during which he delivered an official thank you.  He wanted to express his gratitude and recognize him.  Everything what Fr. Cantalamess said was important to the Holy Father.  We saw it as we were sitting with him in a small chapel right next to the hall where Fr. Cantalamess was leading the retreat.  We listened together.  And, the Holy Father was taking notes.  It is remarkable that the Pope was taking notes from the retreat, when he delivered so many.  He was taking notes like a student.  He was contemplating every word, because that word feeds him.  In anticipation of the One, Who – as he was saying – “has already come, Who will be come, and Who constantly is coming”

With permission of Archbishop Mieczysław Mokrzycki – “A place for everybody”