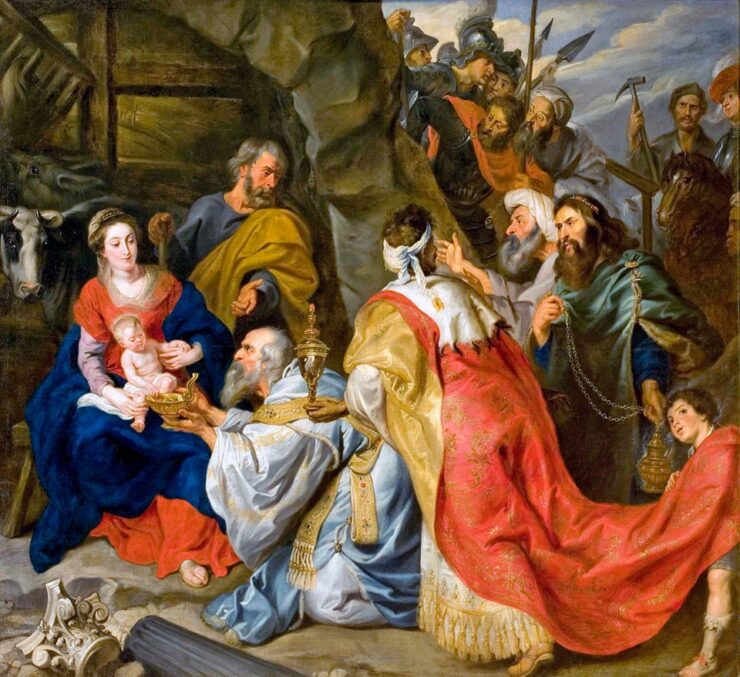 1. The prophet Isaiah looks to the future. However, he does not contemplate the temporal future. Enlightened by the Holy Spirit, he sets his sight to the fullness of the time, to the fulfillment of God’s plan in the messianic time. The prophecy delivered by the prophet relates to the holy city which, in his sight, it is radiating with light: “For darkness covers the earth, and thick darkness enlaces the peoples, and the Lord shines above you, and his glory is seen above you” (Is 60: 2). This happened when the Incarnation of God’s Word took place. With Him came “the true light that enlightens every man” (Jn 1: 9). From this moment on, the destiny of each person depends on whether he accepts this light or rejects it: in it the life of people is hidden (see Jn 1: 4).

2. The light of Christmas today extends the range of its radiation: it is the light of God’s epiphany. Yet, not only Bethlehem’s shepherds see it and follow it. The Kings of the East also had come to Jerusalem to worship the born King (see Mt 2, 1-2). Together with the Magi, the nations also begin their journey to God’s Light. Today, the Church celebrates this saving Epiphany by reading its description in the Matthew Gospel. A well-known story about the Magi who came from the East in search of the One who was to be born, has long been an inspiration for people piety and has become a traditional element of the Christmas nativity scene. Epiphany is an event and at the same time a symbol. That event was described in detail by the Evangelist. On the other hand, symbolic meaning was discovered gradually as the event became the subject of meditation and liturgy of the Church. 3. After two thousand years, wherever Epiphany is celebrated, the church community draws upon this precious liturgical and spiritual tradition, refining its reflection with it again and again. Here in Rome, according to the custom I have been faithful to this tradition since the beginning of my pontificate, we were celebrating this mystery. Today, we are passing this tradition of a deep theological and pastoral meaning with joy to the third millennium. Dear brothers, (…) today’s liturgy calls us to joy. We rejoice that the light that shone along with the star of Bethlehem to lead three Wise Men from the East to Bethlehem still leads peoples and nations around the world along the same path. Thank you for all the people who have followed this path of faith over the past two thousand years. Let us praise Christ, Lumen Gentium, who has led and continues to lead nations passing through history! To God who is the Lord of time, God of God, and Light from the Light, we will entrust our prayers with confidence. May His star, the Epiphany star, continue to shine in our hearts, indicating to people and nations of the third millennium the path of truth, love and peace. Amen!